Books, children, and a book for children

For some reason I couldn't make myself blog these last weeks - just plain didn't want to do it...
So a quick post while I'm in the mood : )! 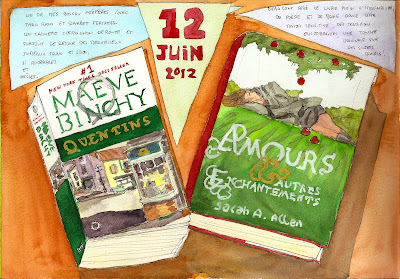 A wonderful Binchy novel on the left. I love all of her books, this one is one of my favorites. The marvellous twins Maud and Simon are in it, and they're so funny and adorable, I'd love to know them in real life!
On the right a very pleasant read, full of charm and fantasy, poetic ideas, feel good ending. Just what I needed! 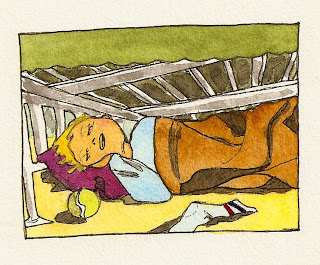 These two drawings are vignettes from my illustrated album project. I'm about halfway through for the drawings. The coloring is way behind. And for the moment I have no idea how I'm going to add the texts... 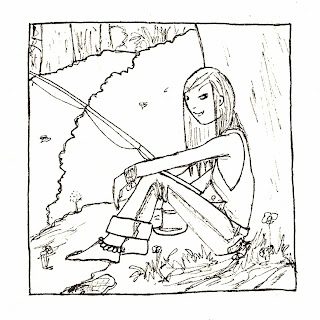 And of course, a lot of drawings will have to be redone. Anyway, I'm still enjoying doing it, and learning from it. It's the first time I really commit to something long, structured, related to drawing/art making, and that in itself is interesting, whatever result I get in the end.

Last reads! On the right, the fascinating work of Carl Jung. I haven't finished reading it yet, as it's not a book you can read fast. I frequently have to get it back to the library and pick it up again a few days later! Luckily no one else seems to be interested for the moment... 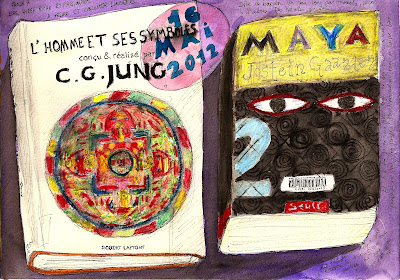 On the right a strange book that has stories within stories. I liked it. There were awesome moments, and some a bit boring. Overall a good read as I was unable to quit even during the slower passages! 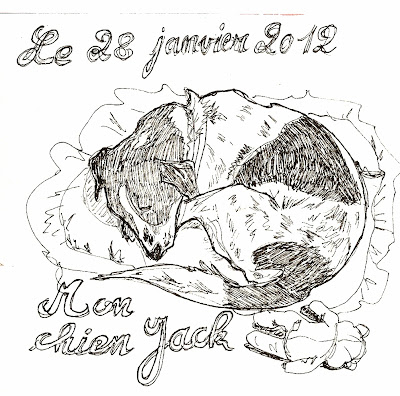 This is Jack, my little dog. He's dead. He ran away and got hit by a car the next day. I found out thanks to a man who took him to the veterinarian, but he didn't survive. I had him less than two months, but I can't believe how fast I got attached to him. I'm still sad. 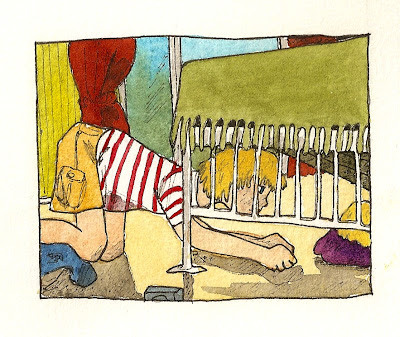 On a much merrier note, here's another little vignette from my illustrated story project. I have done 36 drawings already, four in color. I will have to redo some of them, probably. The shadows on this one are not very good, for a start. Still, I'm enjoying working on this project.

So I've been reading... (what's new?) On the right, a lovely book about a little boy whose father is severely depressed while the mother has gone to Australia for work and never calls her son. The boy is cared for by the fun grand-mother. It could be sad (and it is, at times) but it's mostly funny and poetical and slightly magical, all things I love in a book. 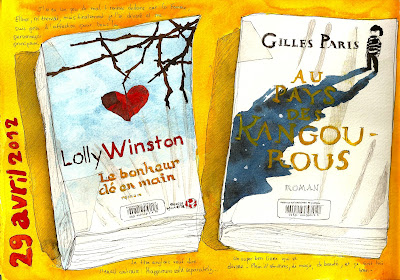 On the right is a book whose American original title is "Happiness sold separately", which is the exact contrary of the french title. It happens often, I really don't understand it. Anyway, it was a great story, I got drawn into it, began to care for the characters, to think about a lot of things while reading. 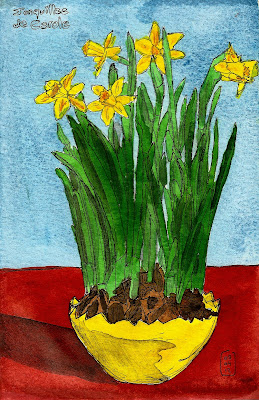 This is something  friends brought me when they came for lunch the other day. My table isn't red at all, but I wanted colors! 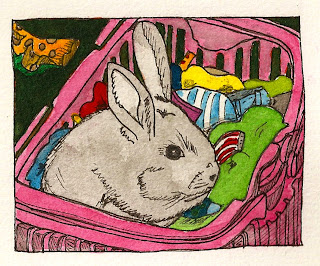 This is a final, colored version of the rabbit in a basket I talked about on another post. I'm not too happy about it, but it'll keep, for now. (and I realised I forgot to darken the shadow near the sock on the left... well,   that can be arranged). 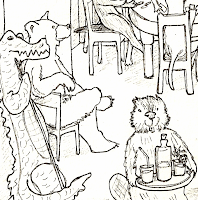 And finally, this is a small part of a much bigger drawing, from the story I'm currently illustrating, one drawing at a time. I'm really happy with how it came out. I'm really surprised (and overjoyed) that I was able to conceive the whole scene and draw it. I didn't think I would be able to do it.
So I'm beginning to feel like I can make this storybook. Only thing is how long it's going to take - and I've already have an idea for another one!
Well, at least I don't have to worry about ever getting bored...

Books again! On the left another one by Anita Shreve. It was very good, very emotional, but I don't think I'll read more books from that author. I like when books give me a little something that helps me grow, or see things in a new way, and here, I don't find that. It lacks magic, in a way. 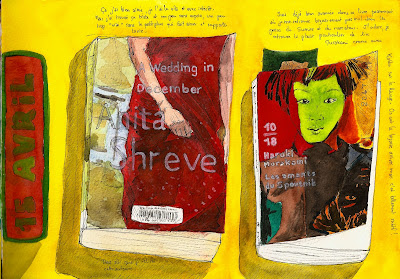 On the right is a book by Haruki Murakami, and it has all the magic I need, and more! It's pure Murakami, everything smooth and normal in apparence, strange and slightly disturbing underneath, with symbols and thoughts and images very precisely inserted because everything has its purpose and is well thought in his books... it could be read 50 times and still give. 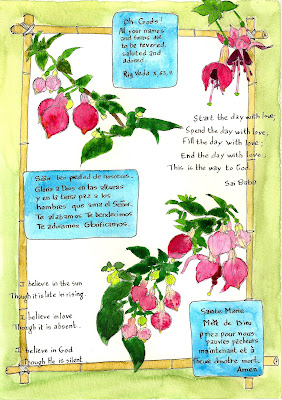 I drew some fushias I bought recently and made this page for collecting a few prayers. Spirituality is a new territory for me, and I'm fascinated with the many ways people everywhere express it. 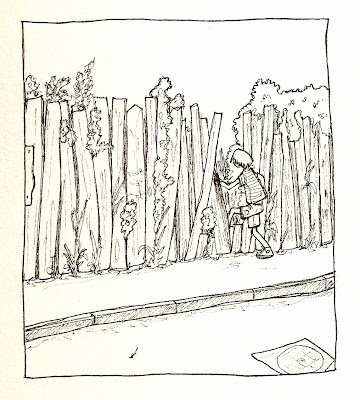 And finally another drawing from my children story book project. I'm working on it regularly, with more or less satisfaction - some drawings I'll probably throw away and do again when I'm done with the first round of creating the vignettes. I have about 36 drawings of various size to make, probably more, to fit with my story.
Anyway, and whatever the result, it's interesting, and new to me to be focussed and regular with a project like this one, so I'm glad for that alone!
Publié par kazumiwannabe à 12:54 11 commentaires:

A fish, a prayer and a rabbit in a basket.

This is my psychedelic sardine. I had this image in my head and just had to draw it - please don't ask me why, I really have no idea... 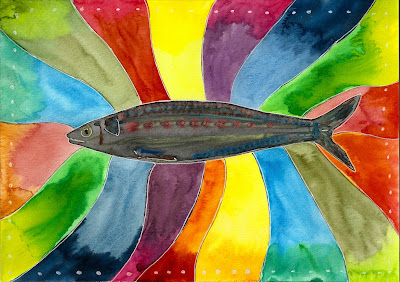 This, I made for a friend. It's a prayer. I had made one a bit like that one for myself, and she wanted one too, so here it is. 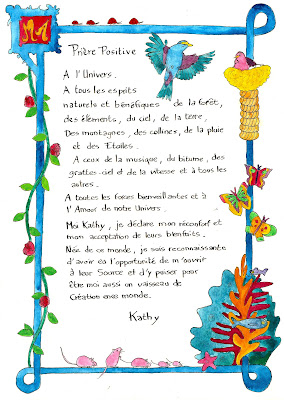 And this is a part of my storybook project. I'm in the process of coloring that one and not happy with the colors I chose, so you get to see it before, when it was still nice and promising... 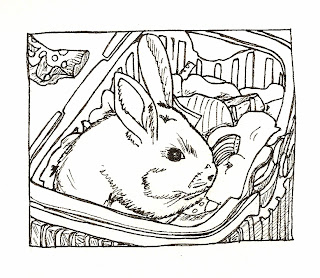 I had this picture in my mind as I was lazying on the beach and it came out exactly how I wanted it, which is very very unusual for me! It's probably strange and it's rather naïve but for some reason I love it and often look at it with contentment. 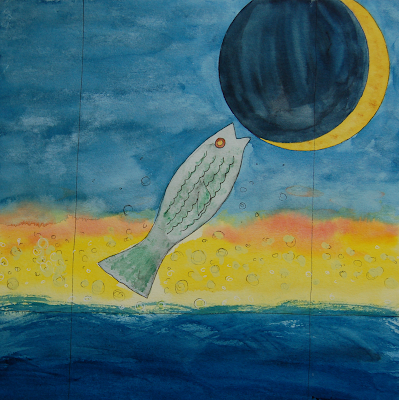 I photographed it, as it's too big for the scanner, so the lines aren't as they really are in my painting, perpendicular to the page...

Last two reads - the Choquette book I read/worked with for months, actually. I love Sonia Choquette, I discovered her books following Julia Cameron's bibliography. I'm opening up to a lot of things I never would have even considered, a few years back.  And it really helps. 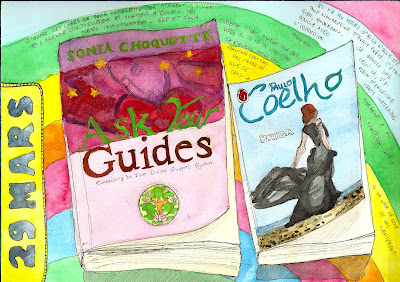 The Coelho book was good, and interesting. I'll reread it, I think. I read only one book by Paulo Coelho before, when I was very young, about twenty. My best friend had lent it to me, it was The Alchemist. I liked it, but since, I never wanted to read Coelho again as I feel he's a bit commercially oriented (but who isn't?) 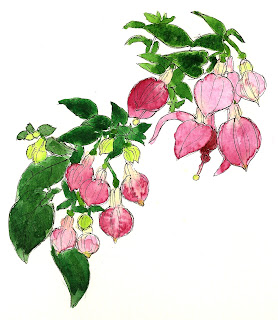 I bought myself a fushia and I'm in love with that plant. It's beautiful and to me it's linked with a personnal promise.
Publié par kazumiwannabe à 11:31 9 commentaires:

Books again because I'm predictable that way... On the left a nice read by Anita Shreve. I picked it up for its cover, in fact, but I liked the story, too ; )! 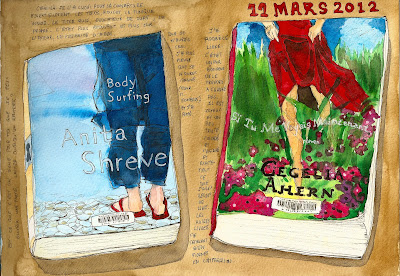 On the right is "If you could see me now" by Cecelia Ahern and I loved that one, it gave me a sense of enchantment and hope and I felt happy everytime I had it in hand.
Some faces, as usual :

First one on the left is a not very good portrait of fabulous dancer and actress Sridevi. I'm not happy with the likeness, but I enjoyed trying to draw her face! 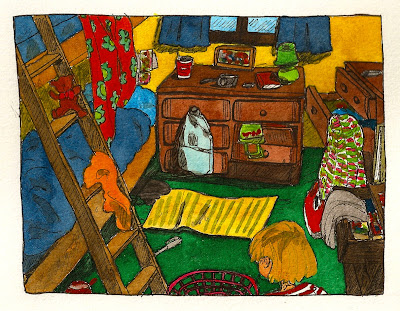 And this is the first colored picture in my little illustration project. I don't know how far I'll go with this but I'm working on it regularly, if slowly. I won't show everything here, as I'm hoping that maybe, maybe, I'll be able to make a kid's book out of it... One can dream!
Publié par kazumiwannabe à 06:03 8 commentaires:

Places I love to visit